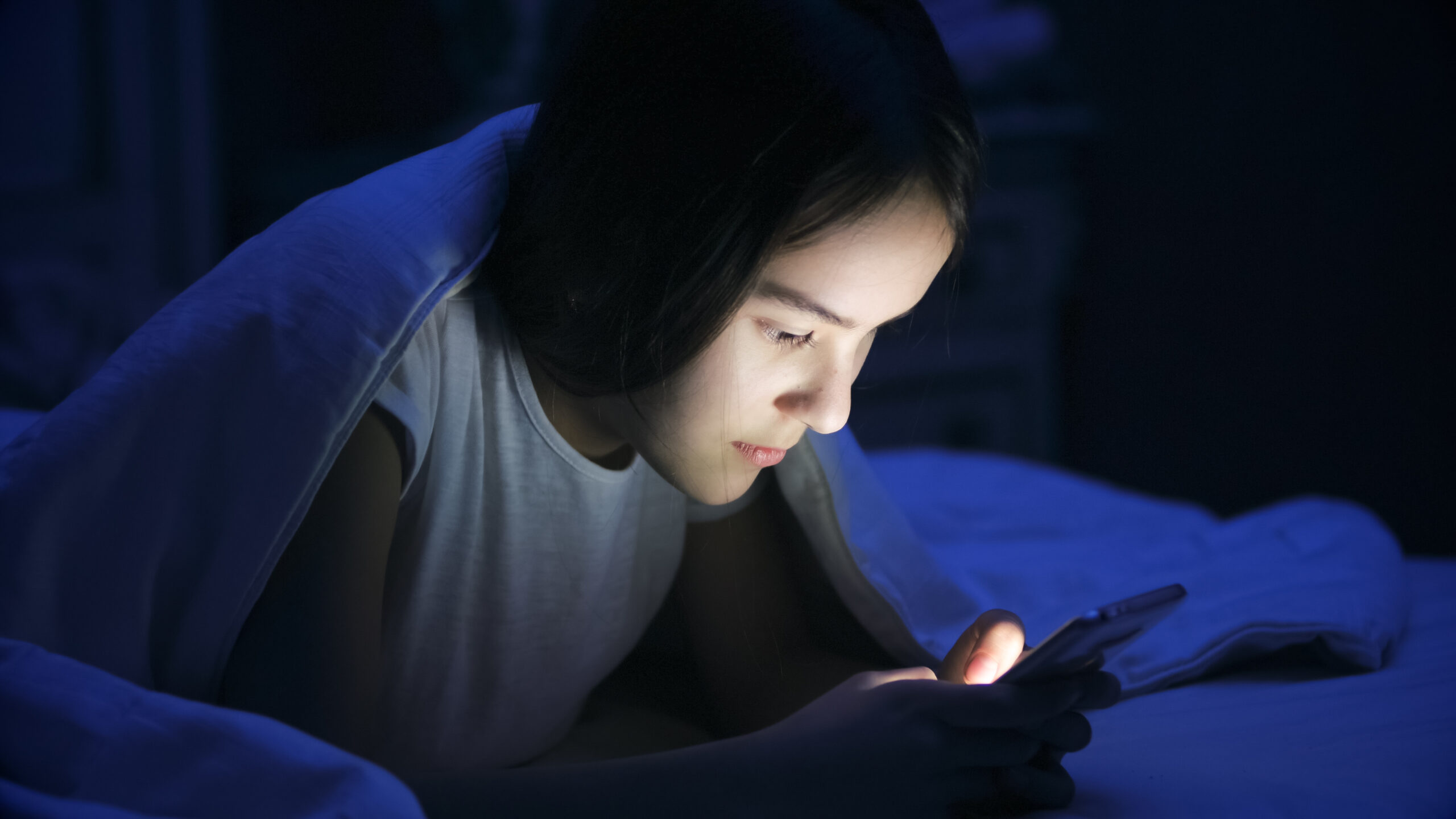 As you walk across a high school campus or watch teens in the mall, you are likely to notice the tell-tale signs of smartphone use. There are slouched shoulders, curved backs, and an intense focus on mobile devices in their hands.

On average, teens spend nine hours each day online, an increase from about six hours daily for kids age eight to 12. Even the teens themselves worry about the amount of time spent on their phones. One study by Pew found 60% of teens age 13-17 think internet use is a “major” problem for their age group, while 54% say they spend too much time on their phones.

This data goes to show that not every teen who is glued to their phone is addicted to the internet. However, there are some teens that take internet use to the extreme, spending well past nine hours online and turning their smartphones into essential lifelines. This guide will help you better understand internet addiction in teens and alert you to any warning signs.

In many ways, cyber addiction is just like any other dependency. Teens turn to smartphones to numb themselves from what they are really feeling. They want to escape into another world and avoid their problems. This casual escapism turns into dependency and then a full-blown addition.

The challenge with cyber addiction is that teens can’t just quit “cold turkey.” Unlike a substance like alcohol or drugs where the addict works to stay clean one day at a time, cyber addicts still need to interact on the web – but they need to learn how to use it in a healthy way.

“The best analogy is when you have something like an eating disorder,” Jeff Nalin, the head psychologist at an addiction recovery center for teens called Paradigm, tells NPR. “You cannot be clean and sober from food. So, you have to learn the skills to deal with it.”

The NPR article profiles a teen who started watching internet videos because she wanted to be popular and keep up with the memes and references discussed in school. This insecurity developed into a compulsion to watch online content and eventually a full-blown addiction that accompanied anxiety and depression.

Interestingly, the concept of internet addiction started as a joke. It was first mentioned in 1995 by Ivan Goldberg, M.D. as a commentary on the standards of the DSM-V (Diagnostic and Statistical Manual of Mental Disorders). Even today, internet addiction is not registered as an official disorder. However, other countries, including China, recognize this addiction and take steps to treat it. In South Korea, there are government-run camps for teens who need to break their smartphone addictions.

Internet addiction in teens isn’t a one-size-fits-all problem. There are so many corners of the web to meet people and find things to do that each internet addict has their own story of building a dependency and filling a need. The Addiction Center actually lists five common types of cyber addiction, of which your teen may have one or multiple:

As you can see, assigning a blanket “internet addiction,” often isn’t helpful to a mental health professional who is trying to understand the root of the issue. By identifying the specific behaviors of the addict – or the triggers that cause them to turn to their phones – it is possible to better identify the problem and work to address it.

Signs of Internet Addiction in Teens

If you notice that your child seems to have a dependency on their smartphones and the internet, take time to understand whether this is normal behavior for a teen growing up in the digital era or a sign of an underlying problem. A few common signs of internet addiction in teens include:

It’s entirely possible that your teen has an internet dependency, but not necessarily an addiction.

“The key signal of internet use disorder — more commonly called internet addiction — is if the uncontrolled use of the internet for gaming, gambling, pornography, social media or blogging starts to interfere with the teen’s daily, real-world life,” Anubhuti Matta writes at The Swaddle.

What to Do if Your Teen is Addicted to the Internet

Naturally, the first step when faced with internet addiction in teens is to confirm the existence of a serious problem and understand how the addiction manifests itself. The next steps involve making sure they get help.

There are also apps you can download to track your teen’s phone use. These can give you an idea of how much time teens spend online and what they are doing.

If you suspect that your teen has an unhealthy relationship with the internet, either because they are addicted to their phones or because they are being cyberbullied, Family Resources is here to help. We offer affordable and free counseling services to families who need it. We can help you address cyber addiction and guide you to handle dependency in a healthy way. Contact us today to learn more.